There are a number of repertoire pieces in Old/New/Borrowed/Blue, let me tell you about the one that is featured on our show graphics:

Vicki Adams Willis, founding Artistic Director (AD) of DJD, now Founder in Residence, choreographed about a billion pieces during her time as AD (1984-2013). One of the most requested is called Every Tap Show Needs a Soft Shoe. The piece was created for 1996’s Feet First in collaboration with Heather Cornell, a featured tap artist and performer in the show that also featured the tap superstar, James “Buster” Brown. Buster was 84 at the time and had been a member of The Copasetics, a “social, friendly benevolent club” of tap dancers and musicians, formed in 1949, dedicated to preserving the memory of tap dancer Bill “Bojangles” Robinson. The Copasetics had a signature dance they did while sitting in chairs, choreographed by Ernest “Brownie” Brown. That chair dance became the basis and inspiration for Every Tap Show Needs a Soft Shoe, which we lovingly refer to as Red Shoes because, well, the dancers all wear red shoes. Vicki is a brilliant choreographer for many reasons, and one is her incredible sense of humour. Red Shoes is a simple yet hilarious dance, and whenever we perform it, it is a challenge to keep a straight face, especially when you can hear the audience cracking up. Sarisa F. de Toledo and I were both in the original cast and when she was here working on her piece, she gave Cassandra, who is now dancing her role, some great tips.

Red Shoes is a simple yet hilarious dance, and whenever we perform it, it is a challenge to keep a straight face, especially when you can hear the audience cracking up. 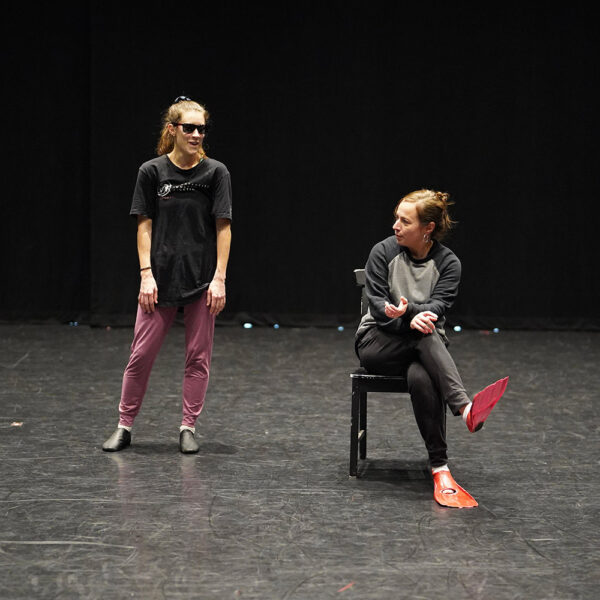 Sarisa was with the company from 1994-2016 and in that time wore many hats including dancer, choreographer, Artistic Assistant and Artistic Associate. During Sarisa’s time with the company, we were very much invested in studying the dances and music of Cuba. In addition, Sarisa has Cuban and Jamaican heritage that have heavily influenced her movement and choreographic inspiration, that are evident in her new piece for Old/New/Borrowed/Blue. While creating it, Sarisa spoke of her interest in the rhythm that is referred to as Habanera, which is rooted in Africa, born in Havana, popularized in Cuba, and has heavily influenced many musical forms internationally. The music for this piece was composed by Sarisa’s husband, Rubim de Toledo, who DJD audiences know as Musical Director, Composer and bassist of many DJD shows including Family of Jazz, Modern Vaudevillians, Wilds, Better Get Hit… Year of the Horse, Ziriguidum etc. etc etc. as well as being a prominent and award-winning jazz musician, very well known in western Canada. Rubim, of course, has composed another wonderful piece of music for this new piece.

Sarisa has Cuban and Jamaican heritage that have heavily influenced her movement and choreographic inspiration, that are evident in her new piece for Old/New/Borrowed/Blue. 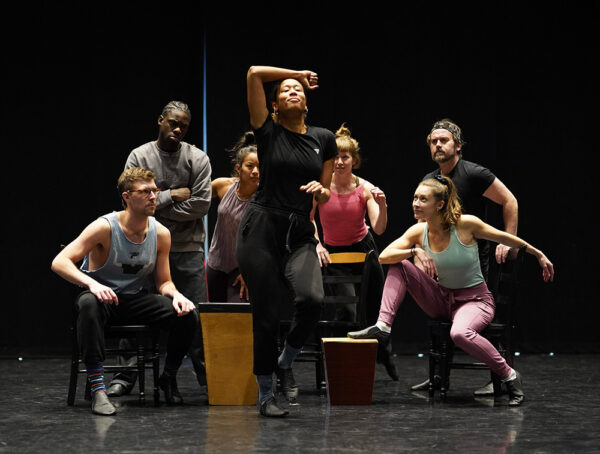 Sabrina Naz Comanescu, company dancer since 2015 and AD of last season’s dancer choreographed show AMPLIFIED, is also creating a new work for the show called The Storm We Are In. The music for Sabrina’s piece is composed by Luis “El Pana” Tovar, a drummer and percussionist from Venezuela, who has been living in Calgary for just over a decade. This is Luis’ first gig with DJD but will be part of the band for our spring show, Nervous Systems. Luis has composed an epic tune, layered with Afro-Caribbean rhythms and influences. It is going to be a very exciting and beautiful piece of music and dance!

I saw Marie France Forcier’s RITE last spring at the University of Calgary’s Mainstage performance and was totally blown away. Stravinsky’s Rite of Spring was written for the Sergei Diaghilev’s Ballets Russes company in 1913, for choreography by Vaslav Nijinsky which, according to legend, caused riots when it was first performed. The score is very famous and has been danced to by many companies. Marie’s version moved me, the physicality, the musicality…

It was originally performed with a cast of 14 and I thought it would be interesting, and also a good investment in emerging artists in the dance community, to invite some of the original cast; Cindy Ansah, Emilie Field, Kadin Aumentado, as well as DJD Professional Training Program student Maryn Bjorndahl, to join us in the piece. This is a contemporary dance piece, but perhaps as many jazz musicians have been inspired by Stravinsky (Ornette Coleman, Alice Coltrane, even Charlie Parker has quoted Rite of Spring) we at DJD can be too. Give it a listen before you come if you are not familiar, it’s a wild piece of music.

This is a contemporary dance piece, but perhaps as many jazz musicians have been inspired by Stravinsky (Ornette Coleman, Alice Coltrane, even Charlie Parker has quoted Rite of Spring) we at DJD can be too.

I will leave blue as a surprise for now…

See you in January!